We had our first hackpompey hack day on Saturday.

35 people turned out to the Innovation Space for a whole day learning, hacking and meeting new people.

Inspired by hack events like hacksoton and Pub Hack, we figured out the key to success was making sure people were well fed, WiFi'ed and powered up.

We didn’t want it to be competitive and should be open to everyone. So we made it free and encouraged people to work on what they wanted.

Here’s a run down of some of what people were doing. 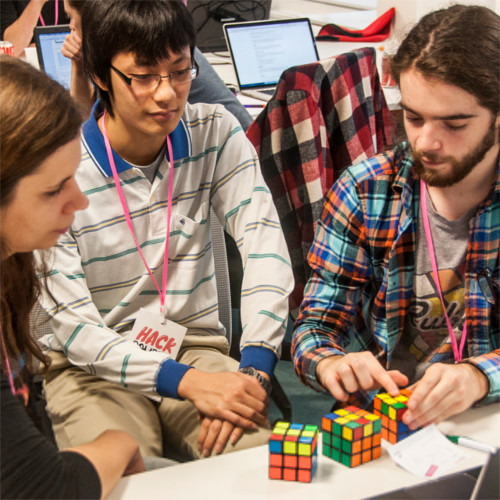 Solving a Rubik’s cube is pretty simple, a lot of people think you need to be a maths genius.

Nick came along with some of his Rubik’s cubes and showed people how to solve them and a bit about speedcubing.

Toby was messing about with Open CV and facial recognition.

Jason designed some logos for the Open Device Lab we’re starting up.

He went for a kind of ‘science lab’ vibe with a flask, and some other device bits and bobs.

Max and the Davids made a game with Pebble smartwatches and web sockets.

Each watch controls one of the dots on the screen and they have to work together try and collide with each other.

Their code is on GitHub.

Gavin, Tristan and Alex wanted to visualise how densely populated places in the world are and compare them.

They came up with a heatmap for people on a global map.

Some of their work is on GitHub. 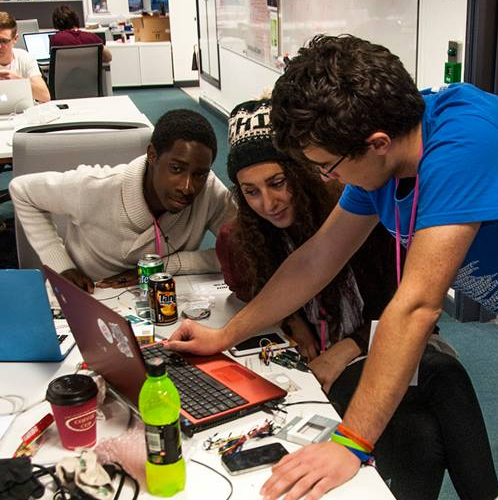 Yasmeen, Peter, Ieva, Toyeeb got cracking with some Arduinos.

Arduinos are small electronics boards that let you do prototyping with electronics controlled by code.

They made some traffic light systems and even got a speaker playing Merry Christmas.

John made a site for the event itself. With all these cool creations it made sense for them to be hosted on hackpompey.co.uk. 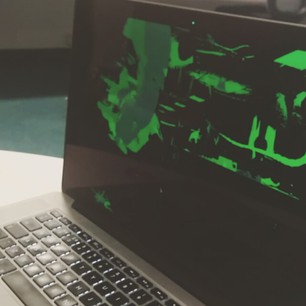 Sean was messing about with web audio and some cool visuals with his camera.

He got people playing with a light painting program that captured white lights and faded them to create a cool effect.

When shining the light on objects (and people) it 'painted’ them into the scene!

Rob was playing with Johnny-Five, a node module for interfacing with a Arduino. He made a RESTful interface for some components he had hooked up.

Then he teamed up with Nick to make what will be next instrument something something.

His code is over on GitHub.

Ben and I worked on a ’Snapchat photo-booth’.

Using a camera hooked up to a Raspberry Pi we listened for snaps being sent to the 'hackpompey’ Snapchat account. We then took a photo from the camera and sent them back a snap.

You can find the code on GitHub.

James was working on some open-source code. Improving the Browser Capabilities PHP Project.

#hackpompey 4 hours late but we made it! Check out the video of our robotic debut: http://t.co/cnfnJh7J27

Jorge and Simon were hacking on their retro robot ROSY. They stayed over after the hack to bring her back to life.

The robot came with a magazine, which included printed BASIC code that you’d use to get it function.

Matthew, representing the Institute of Cosmology and Gravitation, was simulating some cosmic radiation. 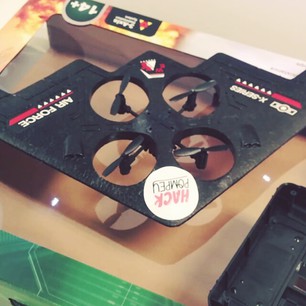 After cannibalizing another quadcopter, Todd, Richard and David ended up with a quadcopter controlled by their phone’s sensors.

The phones sensor data was sent to an Arduino which then interfaced with the quadcopter’s remote.

If you want to see a terribly edited and shakey cam recording of the show and tell, I’ve put exactly that together.

We gave away a few goodies at the end: *drum roll*

Thanks and what’s next

Thanks to everyone that came, it was really fun.

Need to thank Andy and the Innovation Space team for the support and for paying for all the great food.

Deli Too sorted out a great lunch for us.

Also thanks to Nick Savage and the School of Computing for getting bits and bobs for hacking on.

Leong from the Photography Society took some great shots.

You can see some over on the society’s Facebook page.

Finally shout out to Nicola and Mark from the council for coming along. We chatted about themes on the day and we think that’s a great idea so that’s why the next one will most likely be open data themed.

We’ll let you know when that is so follow us at the usual places, we’re 'hackpompey’ everywhere.

Bring on the next one!